Carrot cake is generally a crowd-pleaser. But carrot pudding? When we found this recipe in UPenn Ms. Codex 631, we were intrigued. We also wanted to try a pudding simply because we’ve found so many of them in early modern recipe books. Puddings may have been the eighteenth-century equivalent of the recent cupcake craze.

This two-volume recipe book is dated 1730 (vol. 1) and 1744 (vol. 2) and belonged to Judeth Bedingfield, though it contains the handwriting of multiple persons. The carrot pudding recipe comes from the first volume, which includes not only other recipes for cooking – pickled pigeon, for instance, “quaking pudding,” quince cream, and many more – but also for making various kinds of wine and cordials and for household remedies for ailments like colic. It provides a wonderful example of the range of recipes that early modern recipe books can include. (In fact, stay tuned for when we make our way through some of its other recipes in Ms. Codex 631!)

The corner of the recipe is damaged, but comparing this to other contemporary carrot pudding recipes confirms the “pippins” in the ingredients. “Cittern” is not defined in the OED as anything other than a stringed instrument, so unless the writer was garnishing this pudding with a very surprising ingredient, “cittern” probably means citrus, probably candied or preserved. We could have tracked down candied peel for the “Candid Oringe” but concluded that zest would impart a similar taste. If you happen to have candied peel readily available to you, 1) we’re jealous, and 2) it would probably be great here.

In our modern kitchens, we’re used to pulling out granulated sugar rather than the sugar loaves or rolls that early modern cooks would have used. But Marissa happened to have some minimally-processed “panocha” cane sugar rolls in the pantry that we wanted to try here. We ended up grating a fraction of one roll – hard work for just a sprinkling of sugar! Rather than continuing the arm workout, we used primarily granulated cane sugar.

{We were somewhat unsure of how much we would enjoy carrot pudding, so we halved the recipe. And even though we did enjoy it, this amount still works well, as it fills two-thirds of a standard pie dish. We also added cinnamon and ginger because we suspected that they’d work here, and they do; any spices you would add to a pumpkin pie would also work.}

2 apples, peeled and chopped roughly (*we used Macintosh apples but might try a tarter variety like Granny Smith next time)

zest and juice of 1/2 lemon

Preheat oven to 350F; butter a pie dish or other ovenproof dish.

Boil carrots for ~8 mins. or until tender; add apples for last 2 mins.

Pour carrot mixture into dish and bake 30-40 mins., until set. (It will be slightly more wobbly than baked pumpkin pie filling.)

Serve at room temperature or chilled.

Very orange. And surprisingly pleasant: the apples, citrus, and spices balanced the vegetal base of the carrot. The consistency was somewhere between a pumpkin pie filling and a flan: firm enough to hold its shape when sliced, but jiggly enough that a few dollops ended up on the floor between pie dish and plate. (Oops.) We might bake it in a pie crust next time, or add another apple to the mixture, or perhaps roast the carrots and apples before pureeing them for additional depth of flavor. Adding some pureed carrots to a pumpkin pie base might also work well.

We assume that there will inevitably be a few recipes in this project that we make out of curiosity, gulp down a taste or two, agree that it’s “interesting” (with air quotes), and then continue on with our culinary lives, never to make it again. But carrot pudding does not make that list. 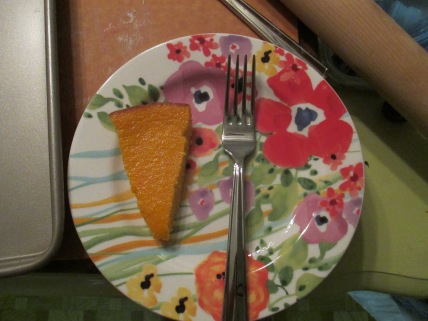