When I was conducting research at the Folger Shakespeare library in June, I saw this recipe for “Carraway Bunns” in Mary Hookes’s manuscript recipe book V.b.342. I love caraway. I love buns, rolls, scones, biscuits, popovers, and trying out yeasted bread recipes (like these “Oven Cakes“). As I prepared to cook “Almond Jumballs” with paleography students at the Folger, I added this recipe to my running list along with the “Snow Cream” I tried in July.

Last week I wanted to bake something warm, buttery, and doughy. (I felt a little bit like the woman in this Onion article.) As I transcribed this recipe, I realized that it was rather similar to my mother’s recipe for Herb Biscuits. Her rich rolls appeared on our Thanksgiving table smelling of sage, onion, and speckled with celery leaves. Seasoned with caraway instead, these buns were just the thing. Like a rich, yeasted biscuit (or scone), these buns are an excellent accompaniment to hearty fall dinner or a luscious snack with afternoon tea.

To make Carraway Bunns         32
Take two pound of fine flower, & three quarters of a pound
of fresh butter crumble the butter very small in the flower went
It with milke bloud warme, & Good Ale yeast halfe a pinte
Att least, Two Eggs well beaten when it is Made into a paste
lett it stand halfe an hower to rise before the fier, then take it
& spread it abroade worke halfe a pound of Carraway comfits
in it & cast in a little white sugar Make them up into Bunns
Lay them vpon paper, & Bake them quick when they are hard
Att Bottome then they are Enough.

The recipe calls for caraway comfits, or sugar coated caraway seeds. I’ve made fennel comfits before (see below), but coating these small seeds in sugar syrup is tricky, fiddly work that I wasn’t up for last week. I used regular caraway seeds instead and increased the sugar. 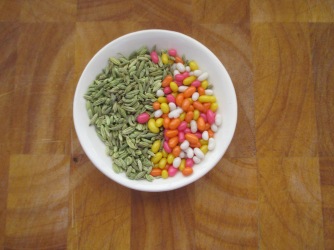 comfits – homemade and store bought comfits with other ingredients

While Alyssa wrapped up things at work and walked over to my place for our cooking date, I put together this rich dough and left it near the warm oven to rise. (I was roasting some broccoli for dinner.) Halved, the recipe made 5 small buns and 6 large buns.

Combine the flour and butter. You can do this in a mixer with a dough hook or in a sturdy bowl. Add the yeasty milk, then the egg, then the salt and dough should form. *Next time I will incorporate the sugar and caraway seeds in this initial mix.* Either keep running the mixer or turn the dough and any unincorporated bits out onto a floured board and knead for a few minutes. When the dough is smooth, cover with a towel and leave to rise in a warm place for an hour.

Punch down the dough and sprinkle in sugar and caraway seeds. *This is what I did with the test batch, but next time I’ll add these earlier.* Form buns and put on a greased baking sheet. I left these to sit for a few minutes before baking, next time I might give them a second rise of an hour or so.

Bake for 20-25 minutes until the bottom and top are both golden brown. Make a pot of tea while they’re baking. Devour.

Delicious, dense, buttery “buns.” They have the crumb of a good biscuit or scone from the butter and a hint of fluffiness from the yeast. But some bites were full of caraway and others were sharply sweet. Next time I’ll incorporate the seeds and sugar from the start.

I think there are a lot of ways to adapt this recipe as well. If you don’t like caraway, use fennel or sage or celery salt or orange zest. If you want to make these sweeter, increase the sugar and consider adding an egg wash and sprinkling sugar and seeds on the top to make a tasty and stunning crust. I’ll be keeping this one on my list.

This weekend I had some extra apples and a head cold, so I wanted to make something that felt cozy. Flipping through Judeth Bedingfield’s recipe book, UPenn Ms. Codex 631, I found this recipe To Make Marmalet of Pippins. Apple marmalade? I was intrigued, and I got cooking. (Which really, for me, sums up this project in a nutshell.)

As soon as I saw the cooling marmalade, I thought, wait, this looks familiar… Last December I made Pippins preserved at cristmas, from Catherine Cotton’s recipe book.   This marmalade is, basically, the chopped-up version of those preserved apples, plus more lemon. These two recipe books are contemporaries, probably compiled in the 1690s and early 1700s. The similarity of the two recipes suggests that this method of cooking and preserving apples was probably fairly common at the time, which makes sense: it requires few and readily available ingredients, takes little time, and yields a dish that can be served in a variety of ways.

I also like to imagine that Judeth Bedingfield and Catherine Cotton, whose books have yielded so many recipes for this project, might have been cooking their preserved apples and marmalets around the same time – and here I am cooking them over 300 years later.

To Make Marmalet of Pippins

Our Recipe
*halved from original

Combine sugar, chopped apples, and water in a small saucepan. Bring to full boil and keep cooking, stirring occasionally, for 30-35 mins. (The marmalade might want to boil over near the end, so keep an eye on it.) Remove from the heat and let cool for at least 15 mins., until apples are amber-colored and clear. Add lemon juice and cook over low heat just until simmering.

*Note: I wasn’t sure whether or not to peel the apples. The recipe didn’t specify, but perhaps peeling would have been obvious to seventeenth-century marmalet makers? So I partially peeled the apples, which were originally destined for applesauce and a bit dinged up to begin with. In the finished product, the peel was barely noticeable, so next time I’ll probably skip this step. However, if you’d like a very smooth marmalade, there’s no harm in peeling the apples.

**Note: Somewhat inexplicably, the recipe suggests you boil the lemon peel in “9 or 4″ changes of water. I chose 4. And while I boiled a few strips just in case, I found that one strip about 1″ wide and 2” long provided enough lemon flavor. 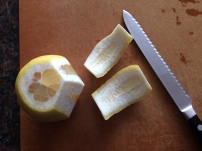 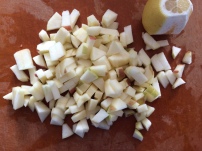 While I liked the preserved apples, I liked this marmalade version even better! The slightly bitter peel cuts some of the sugar, though it’s still very sweet, and this would be lovely spread on bread, an English muffin, or (if you’re like me and make a beeline for them in Trader Joe’s) a crumpet. I was glad I halved the recipe, since it yielded enough for a half-pint jar plus a crumpet slathering; that’s more than enough for me to go through for one batch, but it would easily scale up. I will make this again, especially since a small jar would make a nice holiday gift. I might play with zesting a lemon to see if I can get the same taste without the thicker rind, or with chopping apples even more finely. (I assumed they would cook down a bit, but they largely retained their original shape.) I might also throw in a cinnamon stick or maybe some star anise while the mixture is cooling. 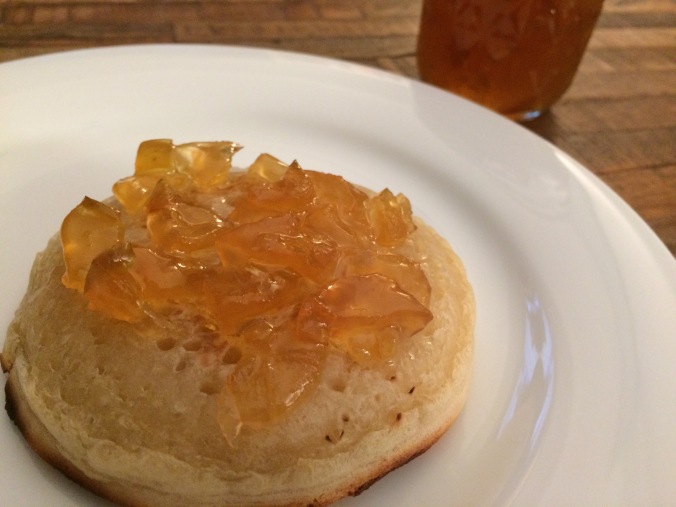