When I discuss Renaissance food with my American college students, the word “pudding” inspires memories of sweet, creamy dessert (often eaten from a plastic tub with a peel-off top). The question of pudding as a recipe category was at the front of my mind when I first prepared this recipe for Almond Pudding with Penn State Abington students last fall. (We also tested Knotts and then baked both recipes for our public event “A Taste of 1677.”)

If I’m talking to a British audience, “pudding” is a far more capacious category of desserts. The Oxford English Dictionary’s first and oldest definition of the word is more aligned with the modern-day British delicacy “blood pudding,” than anything you might want to sweeten the end of your meal: “A stuffed entrail or sausage.” By the later half of the seventeenth century, English recipes for “pudding” might be sausages, steamed cakes, or pastry crusts filled with custard, cooked fruit, or rice and cream. 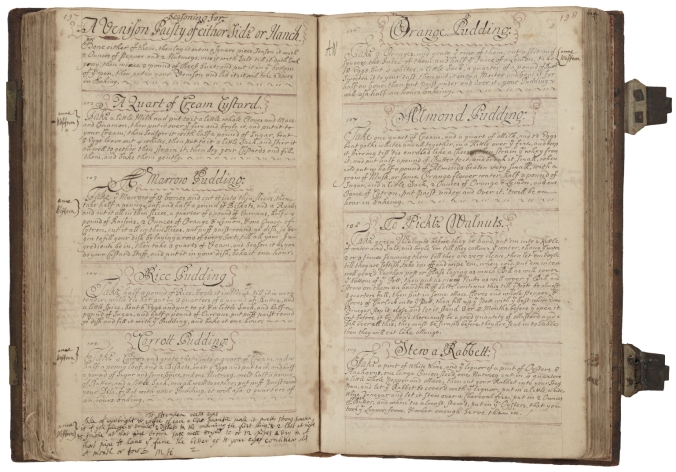 This recipe for Almond Pudding appears in an opening of Folger MS V.b.380 with quite a few other puddings. Each of these pudding recipes – Marrow, Rice, Carrott, Orange, and Almond –  includes a flavorful filling that is baked in a pastry crust. Almond Pudding has far more in common with a modern day tart or pie than a sausage or Jello snack.

Take one quart of Cream, and a quart of Milk, and 12 Eggs
beat yolks whites and alltogether, in a Kittle over the fire, and keep
it stirring till ’tis curdled like a Cheese, then Strain the whey from
it, and put half a pound of Butter to it, and break it small, when
cold put in half a pound of Almonds beaten very small, with a
grain of Musk, or some Orange flower water, half a pound of
Sugar, and a little Sack, 2 Ounces of Orange & Lemmon, and one
Ounce of Cytron, put paist under and over it, ’twill be an
hour in bakeing.

The first time I tested the recipe with students, we scalded the cream, milk, and egg mixture until it curdled and attempted to strain out the whey. Barely any liquid dripped out of the mix and we were left with a stinky mess. Working from the assumption that this first step is designed to address issues with dairy that has not undergone homogenization and pasteurization, I decided to make the mix again and skip the straining step. The resulting filling was luscious and delightfully scented with orange and lemon.

Quartered recipe makes 20 little tarts with one batch of pastry for a double-lidded pie. (I tested this with both store-bought pie crusts and with Mark Bittman’s classic recipe.)

Beat dairy and eggs over a low heat until warm, but not curdled. Add butter. Set mixture aside to cool for 5 minutes.

Roll out and cut pastry into bases and lids. (I used a 3-inch cutter for the bases and either a 2-inch or small star for the lid.) Arrange bases in your baking tins. If you’re using a muffin tin, the pastry will not completely cover the base and sides of the cups.

Fill each cup 3/4 full with custard. Add tops. (You might need to bake these in two batches)

Bake for 20 minutes. The pastry should be nicely browned and any visible custard should be slightly wobbly.

Serve warm or at room temperature.

This recipe comes from my year-long investigation of Folger Shakespeare Library manuscript V.b.380 alongside students and collaborators. I would like to thank the students (past and present) in my What’s in a Recipe? independent study (run through the Abington College Undergraduate Research Activities program); my collaborators Christina Riehman-Murphy and Heather Froehlich; and Shivanni Selvaraj and the PSU Outreach Seeding Change Engagement Grant for supporting my students in their research, event planning, and engagement with Philadelphia.