This recipe was featured in Jenn Hall’s wonderful article about our project in Edible Philly.

Many of the culinary manuscripts that I’ve paged through in libraries include mentions of mothers, grandmothers, sisters, female neighbors, friends, and correspondents. Among other things, these small notes reinforce the fact that the recipe archive is an archive of women’s knowledge and community. (Many smart people have written about this topic, but these two posts from The Recipes Project about emotion and community come to mind immediately.) 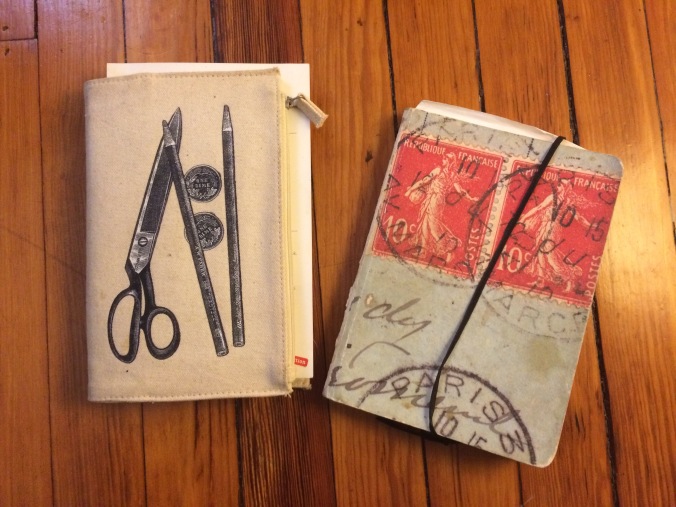 Of course, these notes  always make me think about the recipes that circulate in my own community. I keep my own handwritten recipe notebooks, too. I began to compile the first when I moved to London for a year and wanted to bring recipes with me. The notebook is full of recipes from my mother alongside dishes I’d cooked with friends and roommates in college. These books are part of a larger network of recipes in various material forms: my mother’s recipe box with cards in her handwriting, her mother’s handwriting, her sisters’ handwriting, and the handwriting of new and old friends; the letter I have from my great aunt with her cookie recipe in neat cursive; my notes from the afternoon I spent cooking eggplant parm with my father’s mother because I knew that I was missing crucial steps; printed emails sent from my husband’s family when he wanted to cook a dish from a home. My recipe book is full of attributions: Grandma N’s eggplant parm and my father’s insanely chocolatey variation on her spicy Christmas cookies, Jess’s curried lentils, Joseph’s scones, Grandma O’s soda bread (her mother’s recipe), Erin’s tortilla soup, my family’s favorite chocolate birthday cake, Ruth’s famous zucchini soup recipe that I first made with Bronnie, Rebecca’s salted orange cardamon syrup that I spoon into cocktails at parties, and last (but best represented in my notes) my Mom’s quick meatballs, herb biscuits, stews, zucchini bread, pumpkin pie, and more. This diverse community of women has fed me, sustained me, and taught me how to feed and sustain myself.

I’ve started to collect recipes for mince pies and mincemeats, too. Thanks to my English spouse, Joseph, mince pies are (delightfully) part of my family Christmas now. And this is the second year I’ve added a historical version to the mix. (Here’s the 2015 recipe.) There are still more versions to try. 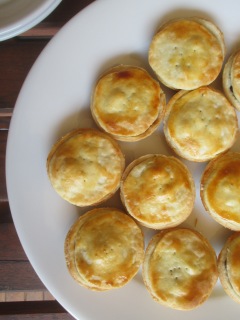 Savory, rich, and delicious, these mince pies are a welcome variation on the classic British holiday treat. Ox (or beef) cheek is a wonderful braising cut and its inclusion here creates a rich, meaty base for the fruit, spices and rum. Make a batch of mincemeat and prepare fresh pies whenever you have guests coming over. They’re lovely hot from the oven with a nice cup of tea.
The day before I made the mince pies, I whipped up a batch of my favorite pie crust from Orangette, used this recipe from Smitten Kitchen to candy orange and lemon peel, and loosely followed Jamie Oliver’s recipe for braised beef cheeks to cook the meat. Boy did my apartment smell good.

Shred or chop the beef into small pieces. For an even mix, make sure these pieces are smaller than your raisins. Grate the suet on a box grater or in a food processor so it is also in small pieces. Combine the beef and the suet in a large mixing bowl. Mix in the currants, raisins, spices, salt, sugar, candied peel, rum and set aside.

Roll out the pastry. Using a pastry cutter or drinking glass, cut circles. I used a 2 5/8 in (68 mm) pastry cutter to make nice little pies. Make sure you have an even number of circles so that you have bottoms and lids for all your pies.

I used my handy mince pie pan to make a batch of 12. You can easily make mince pies on a baking sheet by shaping the top piece of pastry over a mound of mincemeat. I think the full amount of mince would make 4 dozen little pies (or even more).

Grease your pan. Put 1 T mincemeat on/in each bottom. Place a lid on each pie. Push down the edges of the pastry to seal. Poke a few air-holes in the lid with with a fork. I brushed the top with an egg wash for a golden crust, but this step is optional.

Bake mince pies for 10-15 minutes until golden brown.  For a festive touch,  sprinkle  with powdered sugar before serving.

With the perfect mix of sweet, spice, fat, and booze, these mince pies are a decadent holiday treat. What a lovely dish to inherit from a mother, a loved-one, a community, an archive.

9 thoughts on “to make mince piyes my Mother’s way”