There are many recipes for making alcohol in Penn’s manuscript recipe books. But most would require the average home cook to purchase complex equipment and invest quite a lot of time, energy (and, dare I say, courage?) in their execution. From recipes for “braggart liquor” (spiced beer), “sperit of rasberrys” (raspberry wine), and “Meade to make according to Queen Elizabeth receipt” (the “Queen’s” mead) in Penn’s manuscripts, to the infamous recipe for “cock ale” held in the Folger Shakespeare Library collections, working with spirits can challenge even the most adventurous cooks. (And we’re the cooks who made  fish custard!) There are some approachable beverage recipes in the archive. Our recipe for could possett was one, “Chery brandy” from Ms. Codex 1601 is another.

to a gallone of Brandy one dossin of blake
cheryes, pound the stons in a mortar to
brake them put them into an earthin pot
with the brandy stir them once a day
for nine dayes stop them uery close.
then straine it and squeise the chereys
[a]s drey as you can, then bottle it.

This is a very simple recipe. Cherries mingle with alcohol and magic happens. Other than reducing the volume a bit, we only made one major change: We didn’t break the cherry pits or add them to the liquor. Cherry pits carry low-levels of toxins, like cyanide. We may be fearless in the kitchen, but we see no need to experiment with known poisons, whatever flavor they may impart to a beverage.

Put brandy and cherries in a well-sealed glass container. Place in a dark, cool area and stir daily for nine days.

Over the nine days the cherries infused the brandy, the color of the concoction slowly, incrementally deepened to a rich red. Chery brandy is beautiful to look at in the bottle and in the glass.

Straight up, chery brandy is a bracing beverage. Like any brandy, it is a warming drink with strong flavors. The cherries added a pleasing, rich sweetness. After the initial sipping, we added an ice cube, bitters, and lemon peel to create a mellower drink, a sort of “chery brandy old fashioned.” We think this would be a great way to savor a hint of summer cherry deliciousness on a cold winter night. But it’s high summer, so we took it one step further and added some ginger ale to the mix. This final result created a lovely refreshing cocktail.

To make a “Chery brandy fizz”

With late-summer stone fruits flooding the farmer’s markets, we’re curious to see how this recipe would work with apricots, plums, and peaches. Other base alcohols could add unique flavors to the mix (plum vodka? peach rum?). Melissa Clark proposed a related method for preserving summer fruits in alcohol in the New York Times  a few years ago. But, as you now know, mixing fruit and alcohol is a very old idea. 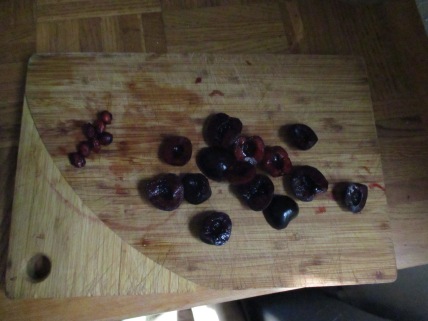 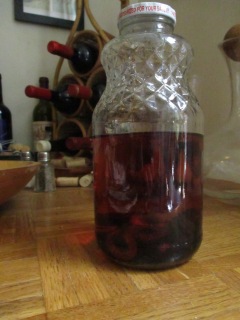 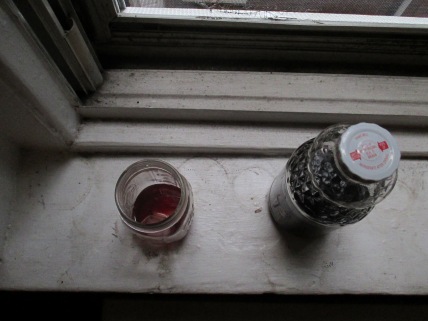